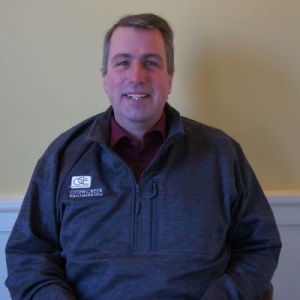 Bob has a long employment history with Otter Creek Engineering starting in 1999. While employed at Otter Creek Engineering, he has worked as a Senior Engineering Technician responsible for survey and design plan development, as well as a Senior Resident Project Representative responsible for construction observation and reporting on numerous publicly and privately funded projects. Additionally, during this time period, Bob has worked in a variety of other positions: Owner of his own small construction company, Construction Superintendent, Construction Project Manager, and as Lead Inspector / Project Manager for Vermont Gas, where he was given the Service Awards in 2017. Bob’s diverse experiences make him uniquely qualified.

In his free times, Bob enjoys golf and mountain biking as a way to relax and take in the outdoors. He’s a big pro-football fan, which he enjoys watching to get through the winter. Motorcross is an old passion that he once took part in but now enjoys as a spectator.